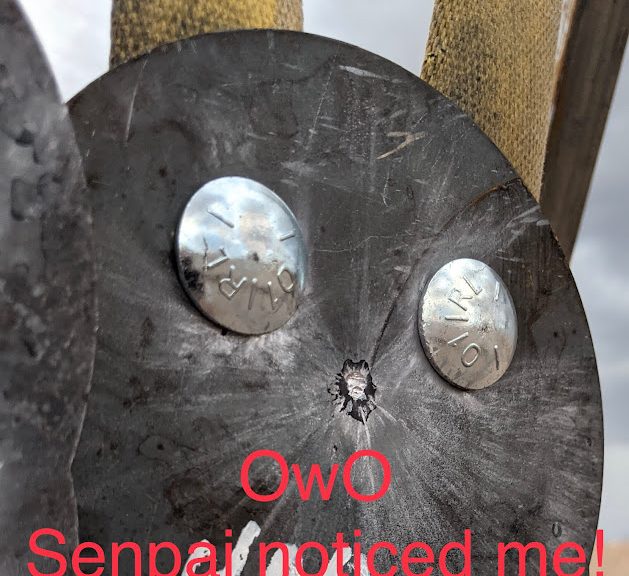 Recently, we had a batch of 1/2″ AR500 targets cut which we ended up questioning the actual material hardness. Every batch of material we cut into targets includes what we call a QA/QC Blank. Two overlapping 6″ circles, with two bolt holes. Simple, but not something people ask for as a target so it’s easy to pull from each sheet, label for the batch, and have available for testing.

We’ve done this before and written it up, when it was a question about 5.45x39mm, but that’s been almost seven years ago. https://moatargets.com/blog/qaqc-testing-moa-steel-with-5-45x39mm/

This test was prompted by a hand written note on one of the piece of material, which seemed to indicate it was AR400.

We could do the research, find out about the heat number, back track all that, and still not know if they grabbed the wrong material, or the wrong paperwork. So we tested the actual material.

Testing method is pretty simple. Taking a known standard of AR500 material, in this case, a blank from 2017 from a known batch, the material to be tested, and some additional material for comparison, head out to the range.
We chose to use our standard A-Frame Brackets to mount the testing materials. https://www.moatargets.com/in-stock-targets/2×4-bracket,%20target-stand

Testing materials were hung from the 2×4 crossbeam with our 12″ firehose kits, which include the hardware shown. https://www.moatargets.com/in-stock-targets/firehost-steel-target-mounting-kit

Testing targets as set up on MOA Targets A-Frame Brackets and Firehose Kits. Similar to the MOA Starter Kit which would include the brackets, firehose and hardware, and one 8″ gong of 3/8″ AR500.

As velocity based damage is a result of exceeding hardness, not thickness, our conclusion was that the subject 1/2″ material was indeed cut out of AR500 and we could go about our day. Scroll back up and note the dent in the 1/4″ AR400 material, not only did 5.56x45mm pit the target, it bent is as well. That’s not observed on the 3/8″ or 1/2″ material, and is the subject of another blog post. https://moatargets.com/blog/14-ar400-as-a-long-range-rifle-target/

We hope this has been a useful writeup for you guys. We had fun shooting stuff, got to confirm that our QA/QC methods work, and enjoyed some nice desert air.