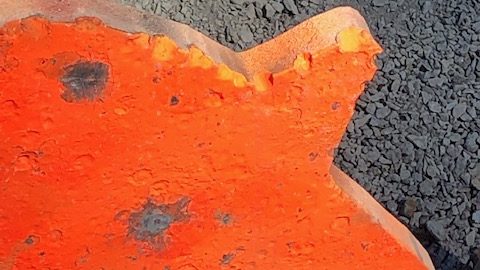 Historically, we haven’t actually encouraged ranges to pony up for our 1″ AR500 unless they were going to be used for 50BMG. Five years ago (summer 2014), a range in northern California requested some custom 1″ AR500 targets from us, to replace their worn out targets. So we did, so here’s the story and the current status of the targets we provided.

One of our recommendations to the client for target longevity and staff safety was to integrate the swing arm into the target. The down side is cost and it makes the target difficult to rebuild. The up side is safety. Grinding and welding on steel targets which have been shot gives unacceptable risk levels of heavy metal (primarily lead) inhalation when working on targets. After discussion, the client agreed with our recommendation.

The replacement targets included full scale NRA Silhouette pigs and some standard round gongs. The 1″ AR500 pigs included the integrated swing arm, as discussed above. It was decided that 1.75″ was as good a number as any to pick for the arm. Wide enough to give us enough material to avoid heat affected zone to the core (roughly 1/4″ from each cut edge is affected), narrow enough to reduce weight and impacts. This was the first time we’d done something like this in 1″ AR500, so there was scientific wild ass guessing going on.

To our delight, the range contacted us this summer to request more 1″ AR500 targets. Not, as one might expect, to replace the 2014 targets, but instead to add to them. Despite pretty significant price increases we’ve had to make since 2014, the range elected to add a full size NRA Ram to their collection. They are very pleased with the field results of the 2014 NRA Pigs and gong, and sent pictures to show the current conditions.

It was quietly suspected that some shooters might focus on the swing arm in an effort to show off their skill, and damage the target. We’ve all seen shooters do this in the field, targeting chains, bolt heads, and other non-target portions of the system. One of the first things we learned in this business was that the target was almost secondary to the stand and suspension system.

It’s clear, after five years, that the 1.75″ wide swing arm is sufficient to prevent premature failure of the system.

1″ AR500 won’t be for everyone. It’s heavy and expensive, and still vulnerable to surface damage from high velocity or hardened projectiles. However, for ranges that want long service intervals, this is an option that may solve problems. Please feel free to contact us for information on in stock and custom 1″ AR500 targets. www.moatargets.com